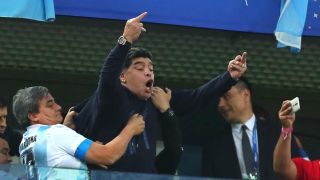 Diego Maradona enjoyed the late winner against Nigeria that kept Argentina in the World Cup, the football legend caught celebrating with an offensive gesture in the stands.

Maradona - who was also pictured dancing with a Nigeria fan - has been a lively presence at all three of Argentina's Group D games at Russia 2018, with Jorge Sampaoli's side in grave danger of an early exit on Tuesday.

Although Lionel Messi struck early in St Petersburg to put Argentina in pole position to follow Croatia into the last 16, a Victor Moses penalty levelled for the Super Eagles in the 51st minute.

Argentina would not be denied, though, Marcos Rojo slamming home a cross from fellow defender Gabriel Mercado to keep Messi's men in the tournament.

Maradona has not held back in his criticism of the Argentine Football Association and coach Sampaoli throughout their troubles, but the 1986 World Cup icon revelled in the stunning scenes caused by Rojo's late volley.

With the cameras capturing his every move, Maradona opted to mark the goal with a double middle-finger salute that drew criticism on social media and will keep his name in the headlines once again.