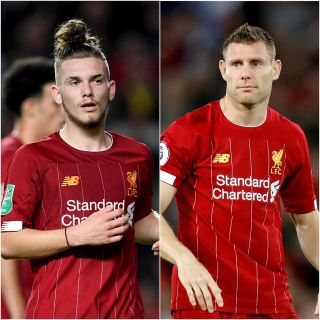 Jurgen Klopp was full of praise for the old and the new of Liverpool as his much-changed side eased past MK Dons in their third-round Carabao Cup tie.

The Reds secured a 2-0 win at Stadium MK to set up a fourth-round meeting with Premier League rivals Arsenal at Anfield next month.

Klopp altered his entire starting line-up from Sunday’s win at Chelsea as Harvey Elliott became the youngest player to start a competitive match for the club.

No guessing where I am for some Carabao Cup action tonight. Jurgen Klopp makes 11 changes for #LFC including debuts for Brewster and Elliott. No big names on the bench either so its up to this side to do the business. Likes of Ox, Lallana and Keita should see to that. pic.twitter.com/aMnPeP4zlR— Mark Mann-Bryans (@MarkyMBryans) September 25, 2019

The 16-year-old put in an accomplished display and twice hit the crossbar as James Milner profited from terrible goalkeeping from Stuart Moore to put the Reds in front before young defender Ki-Jana Hoever wrapped up a comfortable win with his first goal for the club.

While there were plenty of positives to take from the youngsters, Klopp was delighted with the performance from evergreen Milner as the 33-year-old set an example for his precocious team-mates to follow.

“This man is on fire,” Klopp replied when asked about Milner’s contribution.

“This is how it is, it is good. It helps a lot and he is a real role model for young players. If we could play every day he would be like this every day – that is how it is.

“We were here to win the game, no other reason, so I am so happy we went through, that is cool.”

At the other end of the career spectrum, Elliott also impressed on his record-breaking Liverpool debut.

“Sixteen years old still and this kind of footballer, it is good for us,” added Klopp.

“(He is) a brilliant boy, takes the situation really well, wants to learn and he will always be a special player in moments but his overall game is really, really good.

“He was a bit unlucky otherwise he would have scored, he is a good player but they are all good, we have no bad young players and that is why it is important we can give them these matches and try to continue like this.”

MK Dons boss Paul Tisdale had taken Liverpool to an FA Cup third-round replay in 2016 when in charge of Exeter.

He could not repeat the feat on Wednesday night but was pleased with the effort of his players, who saw several decent chances fall by the wayside – with Jordan Bowery’s late shot off the post the closest the hosts came to a goal.

Asked how he viewed the evening, Tisdale replied: “Overall pretty good, I was proud of the way they played and I’m disappointed for them that we didn’t score a goal.

“That is football. But I am really proud with the way we played, I regret not getting in at half-time 0-0, it was a position-based performance about keeping it tight.

“That wasn’t to be but I thought it was a really good night – I didn’t enjoy it myself but most people here would have enjoyed the game.”