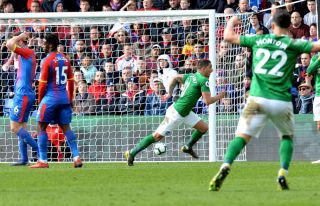 The visitors’ second successive league triumph, having previously been winless in 2019, moved them level with Palace on 33 points with nine games to go and back into contention for a mid-table finish after their poor form had left them at risk of relegation.

Chris Hughton’s team have further difficult fixtures between now and the season’s end, but the rediscovery of a sense of momentum, this time secured by goals from Glenn Murray and Anthony Knockaert, looks likely to carry them to safety.

Luka Milivojevic’s penalty had briefly brought Palace level, but, as they struggled to create chances, fine finishes from Murray, only recalled when Florin Andone was injured in the pre-match warm-up, and Knockaert justified Brighton’s three points.

The tone for an intense affair looked to have been set as early as the opening minute when Knockaert was booked for a foul on Milivojevic and was perhaps fortunate to avoid a red card, but the match instead simply became tense and largely defined by errors in the absence of consistent attacks.

Michy Batshuayi had forced a routine save from Mat Ryan and Wilfried Zaha curled harmlessly over when, in the 20th minute, from what should not have even represented a half-chance, the visitors took an unexpected lead.

Amid suspicions of handball, Lewis Dunk sent an aimless long ball into Palace’s half that James Tomkins misjudged and allowed to bounce into Murray’s path instead of heading clear. For all that he had been gifted possession, the striker still had Vicente Guaita to beat from an angle and he did so superbly, shooting first time beyond the goalkeeper and into the far left corner.

His 100th league goal for Brighton also represented his fourth from four games against old club Palace, whom he left in 2015, and more importantly gave an organised team low on confidence a lead to defend.

They did so with numbers and depth, limiting their rivals to only a blocked effort from Zaha after the ball was deflected into his path, Ryan tipping over Tomkins’ header from the resulting corner, and a further deflected shot from James McArthur before half-time.

Palace were becoming reliant on another error to create the space they required to score and Davy Propper duly obliged with a clumsy challenge on Andros Townsend that gifted them the 50th-minute penalty from which Milivojevic equalised.

If scoring increased their intensity as Brighton continued to tire, they still struggled for creativity. Intead, from out of the blue in the 74th minute, Knockaert restored the visitors’ lead.

Controlling a fine long pass from Dale Stephens on the right wing, the midfielder cut inside Patrick van Aanholt, carried possession to the edge of the area and then brilliantly curled an effort in off the inside of the far post to seal victory.