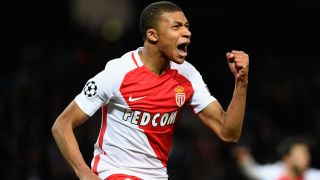 Monaco's teenage sensation Kylian Mbappe insisted he will not be forced to go anywhere he does not want to as he stressed the importance of regular football amid links with Real Madrid.

Mbappe has taken French and European football by storm this season, winning Ligue 1's Young Player of the Year as Monaco claimed the league for the first time since 2000.

A world-record transfer has been touted for the 18-year-old France international, who is reportedly attracting serious interest from Madrid, Manchester United, Arsenal, Liverpool and Manchester City.

"I will make a choice based on my sporting career, and my career is first and foremost, and I am at an age where I need to play, and that will be paramount," Mbappe told beIN Sports.

"I'm not 35 or 36, an age where I have to manage [my body], I still have everything to learn, this year was discovery, and now comes the most important step: Confirmation.

"And I will be the sole decision-maker, and I will not go anywhere where I will be forced to go."

Asked if the World Cup will impact his decision, Mbappe said: "It will not matter, the pressure I always had it, I was mediated early, I learned to handle it, I got used to it and it's part of my environment. Disrupts me, neither my family, nor the club."

Mbappe enjoyed a phenomenal breakout campaign, with 26 goals in all competitions as Monaco also reached the Champions League semi-finals.

"In football, everything is possible, from the moment you work and you believe in your qualities," he added.

"I always believed in myself, it wasn't enough to want to, you have to give yourself the means [to succeed]. I didn't know it was going to happen so fast, but I knew I wanted to do it."