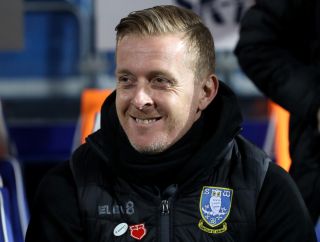 In his programme notes, Monk highlighted the need for “consistency in performance levels” after the midweek defeat at Wigan – a  fifth defeat in six league games.

The first effort of note came when Wednesday pair Jacob Murphy and Kadeem Harris combined to set up Moses Odubajo, whose low drive from the edge of the area flashed narrowly wide of Bartosz Bialkowski’s right-hand post.

Adam Reach went close to putting Wednesday ahead a few minutes before the interval when he met a good cross from Harris at the near post, but his glancing header went beyond the far upright.

Fernando Forestieri put a low shot on target, but it was straight at Bialkowski, who gathered the ball comfortably.

Substitute Jon Dadi Bodvarsson had a great chance to nick a win for the Lions in stoppage time when he got on the end of a long ball which had been flicked on, but with just Cameron Dawson to beat, his chip over the keeper cleared the bar, much to Wednesday’s relief.

Monk said: “I definitely feel more pleased with that performance in terms of what I’d asked for.

“I knew in my own mind that the team naturally wouldn’t be as confident as you would like, but I felt that in terms of attitude and commitment, I think it was there.

“In the second half I was very pleased with the attitude of coming out to try and win the game.

“I thought we really tried to push and got into some good areas but that final pass or touch didn’t quite come for us today.

“We knew it was going to be a difficult game and I think overall it was probably a fair result. It was quite an even game.

“It’s not the win that we wanted but it’s a clean sheet and a point. Of course, it’s not perfect but it’s a much more pleasing feeling than we’ve had in recent games.

“I didn’t see a team giving up and it’s a platform to build upon and I think that was needed.”

Millwall manager Gary Rowett said: “I think it was a fair reflection. If you look at the game, I felt maybe we had a tiny bit more control at times.

“They maybe got into some more threatening positions than us without that control.

“I don’t think either team had many chances. Reach, first half, gets a header which was just wide….and then a Jon Dadi chance towards the end, where you’re thinking it could be the perfect away performance, scruffy, horrible, but you go and nick it at the end. I think that kind of summed up the lack of quality in the game at times.

“If he’d have lobbed him and it had gone in, it would have been the right option. I think it’s very easy to look at what he could have done and what he couldn’t have done. At that point, you just want your striker to show that composure.

“We’ve had a tough period so I’m quite pleased with a clean sheet.”