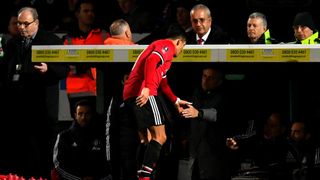 The Chile international recovered from a shaky opening half-hour at Huish Park to play a part in both of United's opening goals, scored by Marcus Rashford and Ander Herrera.

Jesse Lingard and Romelu Lukaku added late strikes to give Mourinho's side a comfortable victory and book their place in the fifth round of the competition.

The former Chelsea boss, who signed a contract extension until 2020 this week, hopes the likes of Rashford can learn from the killer instinct Sanchez displayed with the assist for Herrera's crucial second goal at the end of a slick counter-attack.

"[He's a] fantastic addition," he told BBC Sport. "Like Ander, everybody accepted that he comes here. He's a fantastic player for us.

"The question is always which one is going to be out but it's not that for us. We have a fantastic group of attacking players, [now] we have one with a bit more experience.

"His choice for the second goal is the kind of choice that a player like Marcus is still too nervous to make that kind of decision. He will bring us this extra maturity."

15 - Alexis Sanchez has been directly involved in 15 goals in 15 appearances in the FA Cup (eight goals and seven assists). Impression. January 26, 2018

Yeovil, who are fighting for survival in League Two, delivered a largely combative and accomplished display and Mourinho was impressed with his side's professional approach.

"These matches are difficult if the attitude is not correct [and] even if it is correct," he said. "In the first half, they gave us a difficult time, pressing and aggressive on the ball and on the shin pads.

"I could listen to [Yeovil manager] Darren Way on the touchline and he knew what he was saying but we were professional and, winning 1-0, we had control of the game, we had possession, space for transitions and more quality and we killed the game."

Sanchez started on the left of United's attack but frequently drifted across the final third, and Herrera expects him to prove a menace wherever he plays.

"I think he can play everywhere," said the midfielder. "He's a fantastic player, the attitude he showed is amazing, he fights for every ball even when he doesn't lose the ball.

"It's not easy to come here. This kind of game can be tricky for us but we can be very happy."

Lingard added: "We had to make sure the attitude was spot on. It was always going to be a tough game but everyone was ready to make an impact."