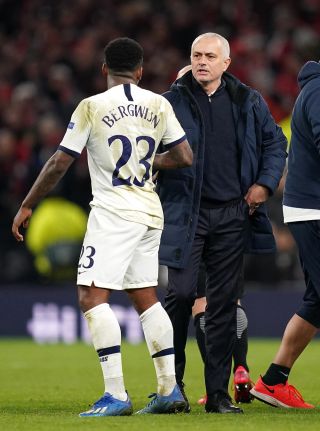 Tottenham head coach Jose Mourinho conceded they are in a “difficult situation” but talked up the fight and spirit of his players after Wednesday’s 1-0 defeat to RB Leipzig.

A second-half penalty from Timo Werner handed the Bundesliga outfit a slender advantage ahead of the second leg of the Champions League last-16 clash.

While the tie is far from over, Spurs, who could be without Harry Kane and Son Heung-min for the rest of the season, will need to create more in Germany than they managed in north London.

Giovani Lo Celso impressed and hit the woodwork with a free kick, while Lucas Moura headed over late on and Steven Bergwijn tested Peter Gulacsl early into the first half, but it was largely RB Leipzig who looked the more threatening side.

“The thing that keeps me confident is the spirit, the mentality of my players. It’s what they are, not just as players, but especially what they are as guys, as a group. Fantastic group of players,” Mourinho said.

“If we want to analyse it a bit more with different eyes, you have to look at our situation and if you want to make an exercise of football, you can maybe think, Champions League game, Barcelona without (Lionel) Messi, (Luis) Suarez and (Antoine) Griezmann.

“Make that exercise, or if you want to look to Leipzig, maybe not Leipzig because they have six or seven different attacking players, but let’s say Liverpool, no (Mo) Salah, (Sadio) Mane or (Roberto) Firmino. They would still have (Divock) Origi.

“We are still in a very difficult situation, but I am so, so proud of the players. What worries me is that this is going to be the situation until the end of the season.

“If this is going to be the situation with a couple of matches, I would say OK we’re in a difficult situation now but when we play the next game in two weeks against Wolves the situation will be different.

FULL-TIME: A big result needed in the second leg – it's not over yet.— Tottenham Hotspur (@SpursOfficial) February 19, 2020

“In speaking about the Champions League and the next match against Leipzig, one thing I can guarantee – because that is the mentality of the players – is that even with I don’t know who playing in attack, we are going to fight until our limits.”

Dele Alli endured a frustrating night in a more advanced attacking role and chucked his boot at the ground after being substituted in the 64th minute.

Mourinho added: “I think he was angry with his performance. Not with me. I think he understood why I took him off and the team improved.”

RB Leipzig boss Julian Naglesmann was not getting ahead of himself after his team’s 1-0 win.

He admitted the second leg will be complicated, although was hopeful the German club could progress into the quarter-finals.

“I do not have the feeling in the dressing room that our team say it is easy to win against Tottenham.

“It will be complicated as well in the second leg, but it will be possible and we will do our best and I hope we will get to the next round.”