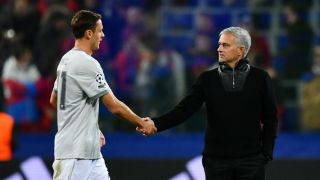 Jose Mourinho has admitted his surprise that Manchester United were offered the chance to buy Nemanja Matic from Chelsea in the close-season.

Many viewed Chelsea's decision to sell Matic as a surprising one, given he had helped the Blues to two Premier League titles in three seasons – the first of which came playing under Mourinho at Stamford Bridge.

And Mourinho himself did not expect to be receiving a call saying Matic was available.

"I was surprised when [Matic's] agent called me to say 'do you want him?'" Mourinho told Sky Sports News.

"I was surprised, but he's an agent I know well. Normally he's very direct and objective, he doesn't waste time, he doesn't try to get people to be interested in his players to improve their situation at their club.

"Normally he's very straightforward, so when he told me 'you can have him if you want', of course I want."

Mourinho makes his latest return to Stamford Bridge for a huge Premier League encounter on Sunday.

United are second in the table heading into the weekend, five points adrift of leaders Manchester City and four clear of Chelsea in fourth.

But Mourinho insists Chelsea are part of a six-way battle for the title this season.

"Chelsea are the champions and one of the top teams in the country and I consider them and they consider themselves too, a big contender for the title," he said.

"I think six [teams are in the race] because Everton, in spite of their huge investment, didn't manage to follow the group.

"I think in the table now you can already feel the four or five are there. If Liverpool are a couple of points behind I'm pretty sure in a couple of weeks they'll be close to us too."