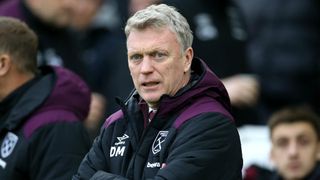 David Moyes claims he was offered a move to another Premier League club but rejected the approach to remain at West Ham.

Moyes was appointed at London Stadium in November, following the sacking of Slaven Bilic, and has led the club to top-flight survival, the Hammers sitting five points clear of the bottom three.

But the Scot, who oversaw Sunderland's relegation to the Championship last season, is only on a contract until the end of the campaign and says he has already received offers elsewhere.

"I could have joined a Premier League club during the season here, when I was West Ham manager," he said. "I chose not to. But I've got other things if it's not renewed. It's not a problem.

"There is nothing scheduled. We always said, even in November, don't even ask me because we won't have an idea before the end of the season.

"I'd probably expect the week after the end of the season we'll start seeing if things can be done. I think my record, the amount of games I've had, the amount of wins I've got, probably apart from two or three managers there's nobody who's got a better win ratio.

"For most of my seasons, apart from one last year, I've been competing at the top six, top eight. I know what it looks like, I know what you need to get there. I need to see if West Ham are going to get there."

But Moyes disagrees with that negative assessment.

"I think West Ham arguably had the best January of any club in the Premier League because we sold three players, made a profit, and bought one," added the former Manchester United boss.

"You could say that was a risk, and if it hadn't worked you could probably be critical of our January. It wasn't for the want of trying.

"We tried to get one or two other players. We ended up with less players - and the one thing we're short of is numbers.

"But you could argue we had the best January because we made a good profit and still stayed up."

West Ham host Jose Mourinho's United in their penultimate game of the season on Thursday.