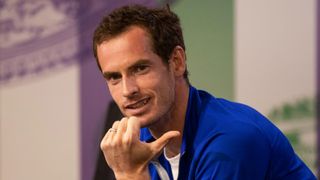 An exasperated Andy Murray invited reporters to abandon a Wimbledon news conference so that he could watch the World Cup thriller between France and Argentina – but the fixture clashes could get worse for the two-time All England Club winner.

Murray was fulfilling his media duties while Kylian Mbappe gave one of the performances of the tournament in Russia, and the Scot made no secret of the fact that he would rather have been watching the action in Kazan.

A lifelong supporter of Scottish Premier League club Hibernian, Murray is the grandson of a professional footballer and he also works as a mentor to young players at the Easter Road club.

He has often spoken about his "huge passion" for football and it was in evidence as reporters tried to keep his attentions on tennis.

"I can't believe I'm missing this match," said the 31-year-old, before pointing towards the door and suggesting: "Shall we just go and…"

Should Murray, who only recently returned from hip surgery, make an unexpected foray into the latter stages of this year's Wimbledon, he could face another scheduling quandary.

The World Cup final takes place on the same day as the Wimbledon final this year, and the official FIFA World Cup Twitter account posted a message to Murray saying: "Just wait until he realises what clashes with the World Cup Final on July 15th."