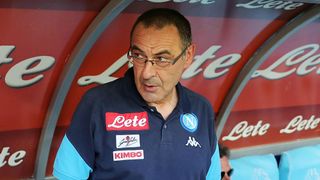 Napoli president Aurelio De Laurentiis has warned Chelsea he will not allow the Italian club to be "pillaged" as the uncertainty surrounding Maurizio Sarri's future rumbles on.

Sarri still has two years left on his contract with Napoli despite being replaced as head coach in May, with the Serie A runners-up appointing Carlo Ancelotti to the role.

Amid uncertainty over Antonio Conte's position, Chelsea have been strongly linked with a move for Sarri, with media speculation suggesting the 59-year-old will sign a three-year deal to take over from his compatriot at Stamford Bridge.

However, De Laurentiis insists he has yet to have any contact with the Premier League club, even though he is ready to be "reasonable" in negotiations over his former coach.

"I never received any calls from Chelsea, even if they are announced via the newspapers," he said during an interview with Corriere dello Sport.

"If that were to happen, I would sit politely and listen, reflect and then give the response that was best for Napoli.

De Laurentiis also confirmed he has not spoken to Sarri either since the conclusion of the Serie A season, yet holds no grudge after their working relationship came to a rather abrupt end.

"I've not spoken to Sarri since then and he never called either," he added.

"After the final match of the season against Crotone, I waited, but neither he nor his manager [Alessandro] Pellegrini made themselves heard.

"I took that into consideration and thought about a phrase my father said: In life you should never let yourself be surprised.

"I don't reproach Sarri, as if anything I should've set the rules and objectives at the start of the season. But being great gentlemen is a characteristic in the behaviour of the De Laurentiis family."