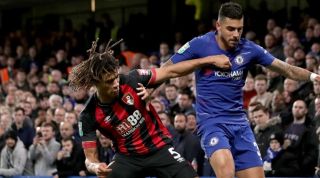 Frank Lampard’s side are in the market for a new centre-back after struggling to keep clean sheets during the first half of the season.

Ake has been targeted as the man to tighten up the struggling Blues backline, as the Stamford Bridge club can activate a £40 million buy-back clause to sign him from the Cherries.

However, the Sun reports that Chelsea need to offload one of their four first team central defenders before signing the Netherlands international.

With Antonio Rudiger and Kurt Zouma currently forming the first-choice partnership and Fikayo Tomori showing great potential, Christensen has been identified as the man to be sacrificed.

The Blues are open to offers for the Dane, but have found it difficult to find an interested party willing to match his £80,000 per week wage demands.

AC Milan have expressed interest, but would prefer to sign the 23-year-old on loan with the option to buy, while the Italians have balked at Chelsea’s £35 million price tag.

Ake has become a key player for Bournemouth, playing every minute of their Premier League campaign until sustaining a hamstring injury in December.

He is expected to return to action before the end of the month.