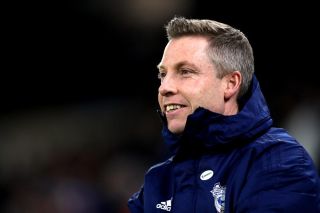 Morrison’s last-gasp header from a few yards out beat Scottish international goalkeeper David Marshall, yet Brooks ruled out the goal for a foul on the Wigan shot-stopper.

“I wasn’t happy with the final decision. I don’t think the stadium was too chuffed, either,” said Harris.

“I’ve had the opportunity to see it back from a couple of different angles. I’ve seen an experienced keeper miss a punch and then scramble to try and make a second contact.

“We surround him but he’s on his way down trying to get back up, moving into my players. The referee’s got a decision to make in the heat of the moment.

“He had a decision to make in the first half, a penalty decision, which was correct. But he’s made a decision in the second half where we’ve had a shout for a penalty when (Cedric) Kipre moved his arm to the ball.

“We’re frustrated. Three big decisions didn’t go our way. It was a game we fully deserved to win, we had the much better chances.

“It was a sucker punch at the end which has deflated a really good week for us – seven points, but it should have been nine.”

Harris was also unhappy at the tackle on Will Vaulks in the opening minute of the game that only earned Lee Evans a yellow card.

“It’s a delicate one because you never want to see a player sent off. If it was VAR, it’s a red card all day long,” said Harris.

“We’re talking about 10 seconds into the game and it’s a very dangerous tackle. Does Evo just get his timing wrong? Probably.

“Do you expect a referee to send a player off after 15 seconds? No you don’t. Is it a red-card challenge? Yes it is.”

Wigan boss Paul Cook was pleased to see his side pick up a second point of the week after their 2-2 draw with Middlesbrough – and even happier that the team above them, Stoke, lost. It means they are now only three points behind them in the battle to get out of the relegation zone.

“I thought it was a fair result, but Cardiff may have felt aggrieved because of the last decision,” said Cook.

“The game huffed and puffed without ever getting going, but it’s been a long week for both sides. I’m delighted for Keiffer Moore.

“To come down to Cardiff and score two goals and play really well in the game, he can be really pleased. I’m sure Cardiff fans will be a bit disappointed by him today, but when he puts that red shirt on again they’ll be right behind him.

“ When he’s playing full pelt and scoring goals, he’s huge for us. For all players, confidence is key and he’s leading the line for Wales, so shouldn’t be short of confidence.

“As for us, we just keep going and believing in what we do. If we win games, we will stay in this division – it’s that simple.”