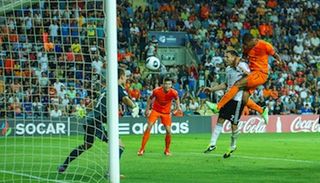 The Dutch beat rivals Germany 3-2 with Fer's 90th-minute header, while holders Spain dominated Russia but had to wait until eight minutes from time for Morata to secure a 1-0 win.

Netherlands were on top in the first-half of their opening Group B clash in Petah Tikva and, backed by most of the crowd including many Israelis clad in orange shirts, went ahead through Adam Maher's powerful low drive in the 24th minute.

They extended their lead when Georginio Wijnaldum, showing some deft touches on the right wing, scored a memorable goal by weaving across the edge of the area and blasting a shot past goalkeeper Bernd Leno, who got a touch but could not keep it out.

Germany came out much more determined in the second half and midfielder Lewis Holtby, who was nowhere to be seen in the first period, immediately found himself in the thick of the action and was brought down in the area by goalkeeper Jeroen Zoet.

Sebastian Rudy converted the penalty in the 47th minute to deflate the Dutch as the Germans sensed a comeback was possible.

Holtby equalised with a powerful low shot from the edge of the area in the 81st minute but Germany then lost their way as they failed to push for a winning goal.

The Dutch had a number of set-piece attempts to score and finally made their efforts count when Fer headed home.

It was a situation beaming Netherlands coach Cor Pot said they had prepared for in training drills.

"We practised on the training pitch situations from the edge of the area and from corners, so for me it was no surprise [that we scored]... I'll now go back to the hotel and enjoy a glass of whisky," he said.

Spain looked the stronger side throughout their clash with Russia in Jerusalem but they only managed to score in the 82nd minute when Real Madrid's Alvaro Morata headed in from a curling free-kick taken by captain Thiago Alcantara on the left.

It provided three vital points for the defending champions in the early match in Group B. Spain had the bulk of possession and were more adventurous throughout, but repeatedly failed to hit the target as the Russians defended bravely.

Morata almost added a second goal in the 89th minute but was denied by the post as he slid in to latch on to a pass.

"It was very difficult because Russia had a very clear idea of how they were going to play the game," Spain coach Julen Lopetegui told a news conference.

"We played our own style but the important thing is to score goals and we found it hard to put the chances away.

"With the format of the competition, we know there is no margin for error, and it is dangerous to ease off in these games," he added.

The top two in each group go through to the semi-finals with the second round of matches in Group A scheduled for Saturday when England meet Norway and hosts Israel face Italy.