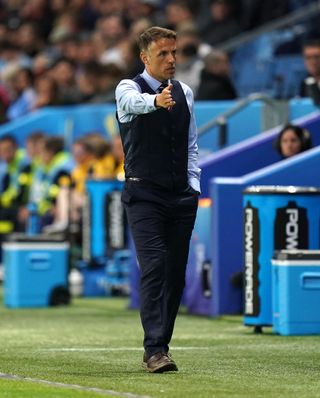 England coach Phil Neville insists he will pick the strongest side possible against Japan despite the Lionesses having already qualified for the knockout stages of the Women’s World Cup.

Wins over Scotland and Argentina sees Neville’s side sitting at the top of Group D with a 100 per cent record as they secured a place in the second round with a game to spare.

Neville will resist the temptation to rest players against second-placed Japan, who beat England 2-1 in the semi-finals four years ago.

Put your hands up if you're ready for match day….😏#Lionessespic.twitter.com/2VQoKhZACD— Lionesses (@Lionesses) June 18, 2019

“And we want to continue and build the momentum that we’ve built in the first two games. So I’ll be picking my best side to win the game tomorrow night.

“I think their system is one of the biggest strengths of their team.

“The way that they all know how to play in their system and are really well disciplined with fantastic movement down the right and down the left.

“And they’ve got two really good centre-forwards who are really mobile so we are going to have to be at our best to get any kind of result.”

Defender Lucy Bronze feels the confidence in the England camp is stronger than in 2015 and that can push them to improve on that performance.

She said: “In 2015 we overachieved a little bit reaching the semi-final, although in that game we actually played really well and we could have won that game.

“Coming into this World Cup we’ve got a lot more belief. That’s one of the things that’s changed.

And Bronze believes playing with Nikita Parris at Manchester City has enabled the pair to form a strong understanding down the right-hand side which has developed into a productive outlet for England.

“Obviously playing at City for so long on that right side – with Jill Scott as well – we formed a really good relationship.

“We won a lot of trophies together at City. We’re a good combination. We work hard together in training. We know each other really well both on and off the pitch so that translates into games.

“She’s had a fantastic season this year and that makes it easier to play with someone who is playing with so much confidence.”