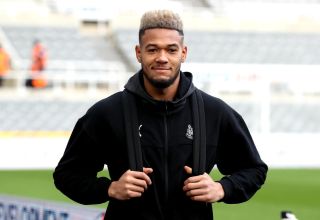 Steve Bruce will stick with Newcastle’s misfiring front three as he attempts to bounce back from a disappointing defeat at Aston Villa.

The Magpies’ head coach is likely to give £81million strike-force Joelinton, Miguel Almiron and Allan Saint-Maximin another try against reigning Premier League champions Manchester City at St James’ Park on Saturday despite the trio having managed just one goal between them in their time on Tyneside.

Asked if it was time to shuffle his pack, Bruce said: “Yes, I would love them to score a goal, but the threat that they’ve caused at the top end of the pitch and what they contribute towards the team is the thing I look at.

“Now, we all want them, of course, to score a goal, and we all think when they do score, then we’ll be fine. It’s getting that balance right in what we’ve got.

“The previous games before Aston Villa against Bournemouth and against West Ham, they were terrific, so I’ll keep persevering with them.”

Newcastle lost 2-0 at Villa on Monday evening on a night when they failed to reach anywhere near the heights they had done in back-to-back wins over the Hammers and the Cherries.

They will have to be significantly better this time around if they are to repeat last season’s famous 2-1 victory over City at St James’ under then boss Rafael Benitez.

Bruce said: “Very quietly, we’ve done OK at Liverpool, we did OK at Chelsea, we’ve beaten Manchester United and we’ve beaten Tottenham, so we are capable.

Bruce could be without wing-back DeAndre Yedlin as he battles a hip problem, while midfielder Matt Ritchie will not play again until the end of January after undergoing a second operation to repair the ankle damage he suffered in a challenge by Leicester’s Hamza Choudhury back in August.

The head coach said: “Listen, it happens in football, unfortunately. I said at the time it was a bad challenge, but it’s worse when the player is out now until the end of January by the look of it.

“Let’s hope this time that Matty makes a full recovery. He’s never really had an injury so he’s not sure how to deal with it, but the strength of character he has, he’ll be fine.”