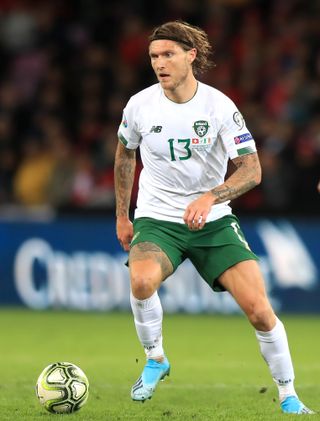 Newcastle midfielder Jeff Hendrick is hoping the pressure of playing in front of a packed St James’ Park will help him replicate the form which propelled him to Euro 2016.

Hendrick will have to wait to run out in front of a 52,000-strong crowd on Tyneside with the new Premier League season due to kick off just as the last ended, behind closed doors.

However, the 28-year-old Republic of Ireland international is relishing the opportunity to launch the new phase of his career in front of an expectant Toon Army having excelled for his country in France four summers ago.

He said: “I really enjoyed that time. Full stadiums, the atmosphere was brilliant, you’re up against class players – I enjoyed it and it probably was the best I’ve played for Ireland.

“People always say I have not shown up since then and that’s crazy because I’ve probably played 30 more times for Ireland since then.

“If you look back at the games, I’ve had some really good games, but maybe in that tournament I was fairly new to the squad as well and I would have been one of the only Championship players starting in the Ireland team then, so I wasn’t as well-known.

“There were a lot of big names still there and I had a very good tournament, but I think I’ve played well since then. I enjoy big stadiums – they probably bring the best out of me.”

Hendrick’s form in France won him a £10.5million switch to Burnley on his return, although he was unable to agree a new deal at Turf Moor as his contract ran down and he has not played a competitive game since March as a result.

The Magpies moved in amid interest from Italian giants AC Milan to secure a free transfer, and the player is currently working with his new team-mates at their pre-season training base in York having kept himself fit despite coronavirus restrictions.

“There were people walking their dogs around, so a few people would have seen me. Sometimes it was on my own, sometimes it was with other people, my mates like Robbie Brady and different lads.”