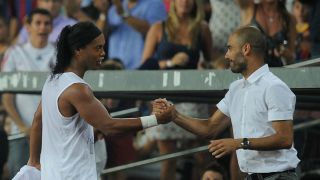 Ronaldinho helped Barcelona to rediscover their self-esteem, according to Pep Guardiola, who paid a glowing tribute to the retiring Brazilian superstar.

The 37-year-old has not played competitively since 2015 and his brother and agent announced this week he would officially hang his boots up this year with a farewell schedule of matches.

The lavishly gifted forward will forever be associated with Barcelona, where he won back-to-back LaLiga titles, the Champions League and the Ballon d'Or during a glorious spell from 2003 to 2008.

He was moved on at the start of Guardiola's tenure as Camp Nou coach and the Manchester City boss credited Ronaldinho with clearing a path for the era of dominance he would oversee.

"When Joan Laporta became the president of Barcelona he made a big impact and when he signed Ronaldinho he was the biggest influence on the pitch Barcelona," Guardiola said at a news conference to preview the Premier League leaders' home match against Newcastle United.

"It helped to recover the self-esteem in that club after some really low years.

"Between Joan Laporta as president and Ronaldinho on the pitch they helped to turn around the situation at the club.

"He had fantastic years at Barcelona – he won leagues and the Champions League."

FIFA World Player of the Year won many trophies but he gave us countless more memories January 17, 2018

Guardiola regularly hails Lionel Messi as the finest player in the world.

The Argentinian was a teenage team-mate of Ronaldinho's, who Guardiola felt was the master until Messi flourished.

"He was a player at another level," he added. "Until Messi arrived, honestly, I had never seen anything like that before.

"I wish him all the best for the future. He had an amazing impact, not only at Barcelona, but in the world of football.