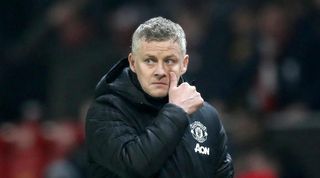 Solskjaer's side have now lost eight Premier League games this season, and won only two of their last seven encounters in all competitions.

However, the Norwegian has cited the example of Jurgen Klopp as evidence for why patience is required at Old Trafford.

Klopp arrived at Anfield in 2015 but did not win his first trophy with the club until last season, when Liverpool lifted the Champions League trophy.

"For me we do have a way of doing things," Solskjaer said when asked if United needed heavy investment in the transfer market.

"Of course you can see other teams have done well. Jurgen [Klopp] spent four years building his team and they're doing well now. I've said it so many time, it's not going to be a quick fix.

"It's not going to be eight or ten players in, in one transfer window. We've had one proper transfer window in the summer, because the January ones are difficult. But we are trying to do something now."

Despite last week's loss to Burnley, the United board reportedly have no intention of sacking Solskjaer.

And the former Molde manager, who has been at the helm at Old Trafford for 13 months, insists he will keep faith with his principles.

"When you start on something you stick to that plan, for me anyway," Solskjaer added.

"I'm not going to change six, eight, nine or ten months into getting the job and start believing in a different way of doing things.

"I'm going to stick to what I've been trusted to do by the club and hopefully that will be good enough, and that they can see what we're doing is right.

"It's one of these jobs that… we know how football is nowadays, but all my conversations with the club have been positive."

United returned to action with a 6-0 win against Tranmere in the fourth round of the FA Cup at the weekend, and face Manchester City in the EFL Cup semi-final on Wednesday.