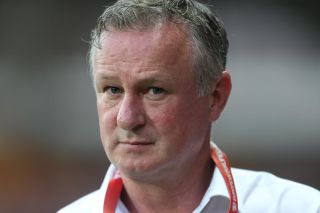 Michael O’Neill has challenged his Northern Ireland players to “take a big scalp” after they gave themselves the perfect platform in Euro 2020 qualifying.

Paddy McNair’s 85th-minute winner saw O’Neill’s side beat Belarus 1-0 in Borisov on Tuesday to move on to 12 points from their first four games, the first time they have ever had such a strong start to a campaign.

For months Northern Ireland’s players and staff have spoken about the target of getting 12 points from these games and – with that mission accomplished – they will no doubt enjoy their summers.

But O’Neill is already looking forward to September, when Northern Ireland host Germany at Windsor Park.

“We’re underdogs playing two of the strongest countries in Europe, but we have given ourselves a chance,” he said.

“What we have to do next, the next indication for this team, is to take a big scalp and we have the chance to do that, particularly in Belfast.”

Holland may have two games in hand, but the yawning nine-point gap to Northern Ireland will put plenty of pressure on them ahead of their next qualifier, which is away to Germany days before Joachim Low’s men come to Belfast.

“The important thing when the draw came out was to try and turn the group into a group of three and we have done that,” O’Neill said.

“It creates pressure for the bigger nations. We’re a tiny nation with a very limited pool of players, people don’t realise that.

“We’ve accomplished a lot in this group, it’s a relatively new team and our dream is to make it to Euro 2020.

“It was a fabulous experience to go to Euro 2016 and get to the last 16 and the players want to experience that again. They’ve given themselves a real chance of being able to do that.”

McNair’s 85th-minute goal means that Northern Ireland have won their last three qualifiers with goals that came inside the last 10 minutes.

It may not be easy on the stress levels for O’Neill or the watching fans, but the manager is not complaining.

“At the moment, the late moments in games are going our way and long may that continue,” he said.

📸 Just look what at what it means! #GAWApic.twitter.com/vLOViYQUI2— Northern Ireland (@NorthernIreland) June 11, 2019

“It’s testament to the players, we have that belief.

“Something’s changed in these players in the last four or five years.

“That may have been a game, going back, that we would have lost. We would have competed well for 70 minutes and then lost to a mistake.

“Instead we’ve gone the opposite way. These are games we believe we can win home or away and it’s a nice characteristic to have in the squad.”