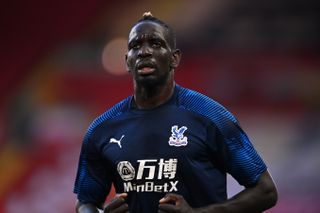 Crystal Palace manager Roy Hodgson praised the commitment of centre-back Mamadou Sakho after he made his return from injury at Bournemouth on Tuesday.

The former Liverpool defender only returned to training on Friday, after a hamstring issue kept him sidelined for close to two months, but he featured off the bench in the Carabao Cup second-round tie.

Sakho, who played 27 times for Palace in the 2018-19 campaign, has struggled with injuries during the last 18 months and yet looked assured in the stalemate with the Cherries, which saw the Sky Bet Championship side progress 11-10 on penalties.

With Gary Cahill and James Tomkins still out, the cameo for the 30-year-old was a major boost for the Eagles ahead of this weekend’s Premier League trip to Manchester United.

“He played very little football in the last season,” Hodgson said of Sakho.

“But he was on the pitch for a long time (against Bournemouth) after doing two training sessions, which is quite incredible.

“The medical staff were very reticent to allow him play, they thought it was too soon and it wasn’t a good idea.

“I spoke to him and he thought that, as long as he wasn’t thrown into the deep end, he could play a part in the game and he did, so that’s another bonus for me.”

Due to unavailability, Palace had to start central midfielder Cheikhou Kouyate at centre-back against Southampton and, while he impressed, Hodgson was fearful of suffering more injuries at Bournemouth.

He was able to rest the entire defence which featured at the weekend and also saw summer signings Ebere Eze and Michy Batshuayi gain valuable minutes on the south coast.

The duo were quiet and struggled to create chances in the cup tie, but they got through 90 minutes along with captain Luka Milivojevic, who missed most of pre-season after he had to quarantine following a trip to Serbia.

“The benefit for us was the minutes and the competitive level of the game,” Hodgson added.

“Michy played 90 minutes for Belgium but got thrown in there and hadn’t done a lot of training with Chelsea so he needed it.

“Luka when he came back from Serbia couldn’t train with us and he was injured for the last part of the season, so for him that is the first 90 minutes in a long time.”

The shoot-out defeat for Palace meant they missed out on successive games in Manchester, with Bournemouth due to face Carabao Cup holders Manchester City in the third round next week.

David Brooks was the Cherries’ star performer and is one of several players at the club linked with a transfer in the wake of their relegation.

Goalkeeper Asmir Begovic was the hero for the Championship side after he denied Milivojevic from the spot, but he spent last season away from the Vitality Stadium on loan and could still depart before October 5.

New boss Jason Tindall said: “We have always got good players linked with different clubs and until someone tells me otherwise, they are still a Bournemouth player.

“And I am delighted to have as many of my best players available to me as possible.”