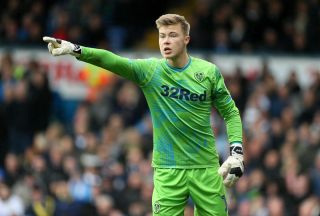 Bailey Peacock-Farrell will look to leave Leeds if he cannot regain the number one spot next season.

The Northern Ireland goalkeeper has one year remaining on his deal but said he is yet to enter talks on a new contract and does not want to stay at Elland Road if it is only to sit on the bench.

Peacock-Farrell said the club had indicated they planned to offer him a new deal but have yet to follow that up.

“They said they wanted to open discussions on a contract but that was two weeks ago and I still haven’t heard anything,” he said.

“But then they also said that last season. We’re a season gone and it still hasn’t happened. I don’t know what to make of it.”

Peacock-Farrell began the season as first choice for Marcelo Bielsa and kept 10 clean sheets in 28 appearances, but the club brought in Kiko Casilla from Real Madrid in January to leave Peacock-Farrell on the bench.

The former Middlesbrough prospect said that left him in a “strange” position as the progress he had made at the start of the season was in danger of going to waste if he is now sidelined.

“The aim is to be playing football, I have to,” he said. “I’m not one of those goalkeepers who could be content with sitting on the bench and picking up a wage.”