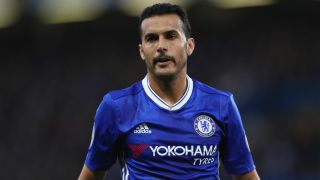 The Spain international clashed with the Arsenal goalkeeper as he chased a loose ball in the first half of the match in Beijing and required lengthy treatment from the Chelsea medical staff.

Pedro walked off the pitch nursing a bloodied nose and Conte opted against taking any risks, replacing the former Barcelona man with Jeremie Boga.

Conte says the 29-year-old will stay in hospital for observation, but hopes he will link up with the rest of the squad on Sunday in Singapore for the International Champions Cup clash with Bayern Munich next week.

"He should be okay," Conte said. "He stays here and if the situation is okay he will come tomorrow to Singapore."

Antonio Conte on Pedro, who went to hospital: 'Should be OK. He stays here and if the situation is OK he will come tomorrow to Singapore.' July 22, 2017

Chelsea were the dominant side on Saturday despite having only played a single pre-season friendly against Fulham so far, with Willian and a double from Michy Batshuayi securing the win.

Conte was delighted with the performance, but warned that the Premier League champions still have plenty of room for improvement before the Community Shield meeting with the Gunners at Wembley on August 6.

"It is good to have this start but we have to work a lot to improve on the physical and tactical. Pre-season is very important," he said.

"These games are important because you understand your level. We must be happy for the commitment of players and with our football.

"To play this kind of derby in China is great and fantastic and I want to thank all the Chinese people for this welcome. To play in this atmosphere is great for me and the players. I hope in the future to come again to experience this."