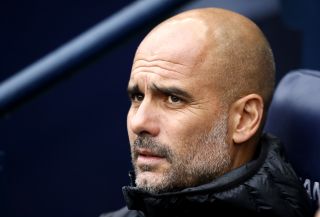 Pep Guardiola is praying Manchester City can avoid injuries as he does not believe Premier League players are ready for the frantic return from the coronavirus suspension.

‘Project Restart’ will come to fruition on Wednesday evening when Aston Villa host Sheffield United before Arsenal head to the Etihad Stadium in the first English top-flight matches in 100 days.

Former assistant Mikel Arteta’s side will provide an interesting test for Guardiola, who is juggling a variety of challenges as City prepare for a chockablock schedule that will to be followed by the Champions League.

Keeping players fit is key for the Catalan, whose worries over preparation are compounded by restrictions on recovery due to measures implemented to stave off the threat of coronavirus.

“We cannot use the ice baths – it is not allowed!” Guardiola said with a laugh.

“So, I don’t know now. We are going to do the best for them, take care of them, try to organise and do the best facilities for the players to be fit.

“The problem is not to play one game, the first one, even the second one. It’s with the lack of recovery, you have to play another game with a lack of physical training or physical condition or being prepared. That is a problem.

“But we have to adapt so there is not another issue, pray a little bit and be lucky that our staff, me, myself as a head coach, try and take the right decisions about the players who believe they can play more minutes than the other one.

“That is the main target of this period.”

City kick-off with an eye-watering four matches in 12 days, so it is little wonder Guardiola plans to rotate and will treat the likes of Leroy Sane and Aymeric Laporte carefully after injury-hit seasons.

“Players that had long injuries, you have to be careful, especially for the recovery situations,” he said.

“There is something this is a routine, the rhythm, and they don’t have it for almost one year.

Guardiola said “most of the players are well” ahead of returning to action at the Etihad Stadium, where the attendance will be restricted to around 300 individuals.

“When they were little kids, they play in the school, in the square, in the street without spectators, they play good in that period so that is what they have to do,” Guardiola said.

“It’s a football game – try to follow a little bit what we thought, what they know because we didn’t change much in these three weeks about what we have to do.

“That’s all. This is the idea to adapt in the situation and just play football.

“Of course what we see in Germany, especially, and in Spain  as well, the local teams have less influence to win games. This is normal.

“When you play at home with the support for your team, always they are these extra minutes, extra passion or extra momentum that they help you to have.

“This is not going to happen, that is why we have to adapt and just focus on what you have to do.

“Play a game and of course try to take advantage of these next games to finish second and qualify for the next season for the Champions League.”

Guardiola spoke about a variety of subjects at his first press conference since mid-March, from praising the NHS and focusing on Kyle Walker’s on-field actions, to the possibility of a post-match bottle of wine with Arteta and his new assistant Juanma Lillo.

The City boss brushed aside questions about his future and Kevin De Bruyne but confirmed David Silva would extend his City contract to take in the extended season before leaving a club great.

“He will stay until the end of the season,” Guardiola said.

“It is unfortunate he is going to finish his last games here without people, but he is coming back – and hopefully himself, the club can have a real farewell in front of people.”