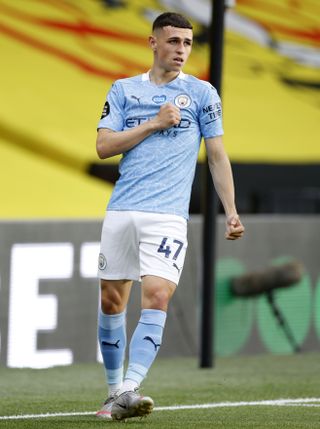 Phil Foden wants Manchester City to finish the Premier League season on a high ahead of Real Madrid’s visit to the Etihad Stadium next month.

The 20-year-old netted in Tuesday night’s 4-0 win at Watford, which helped Pep Guardiola’s men provide the perfect response to their FA Cup semi-final defeat to Arsenal at the weekend.

The result was City’s fourth straight league victory – the first time they had achieved such a feat this season, with Liverpool’s consistency leaving them trailing behind in the title race.

For Foden and his team-mates, the focus now is the second leg of their Champions League last-16 tie with Real Madrid on August 7, but first up is Sunday’s Premier League finale against relegated Norwich.

“We were disappointed with the last game and we tried to change that and be positive,” the midfielder told his club’s website.

“I thought the performance was great from the lads and we looked really back to ourselves.

“It is very important we play well and perform well (against Norwich). It will be good practice going into the Madrid game.”

Foden scored his eighth goal of the season at Vicarage Road to ensure this campaign is his best return for City.

He was not involved in the 2-1 win over Madrid in Spain back in February, but is determined to give Guardiola a selection headache for the fixture.

“Everyone in the attacking area wants to score and assist – that is the standards we set,” Foden said.

“Everyone is pushing each other for a starting place, so it is only healthy competition and can only help us.”

Raheem Sterling netted a brace against Watford and is one away from the 30-goal mark for the season, which he could have achieved on Tuesday had Ben Foster not denied him in the 63rd minute.

Foden was on hand to tap home the rebound and talked up the hunger of his colleague.

He added: “He has been scoring a lot of goals and Raheem will probably be disappointed he didn’t score three – that is what he is like.”

Kevin De Bruyne registered his 19th assist of the Premier League season when he crossed for Aymeric Laporte to head home with 66 minutes on the clock.

The Belgian needs two more on the final day against Norwich to beat Thierry Henry’s record of 20 set in the 2002-03 campaign.

“I am sure Kevin could have broke that (at Watford) with the chances he creates,” Foden said.

“He will probably be disappointed if he doesn’t get it, but he can give it one last push in the last game, so let’s see what happens.”

Watford have dropped into the relegation zone following the defeat to City and with Aston Villa beating Arsenal later on Tuesday night.

It means the Hornets are set to go down unless they can achieve a positive result at the Emirates Stadium on Sunday, a week on from the dismissal of Nigel Pearson as head coach.

Midfielder Will Hughes told the club’s website: “We’re massively disappointed with the result. Now we have to rely on others, and we have to go to Arsenal and win.

“When we cross the white line it’s up to us to perform. The spirit is still there. It’s everything to play for going into last game and we have to give it everything we’ve got.”