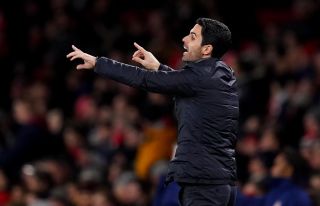 Mikel Arteta has called on his Arsenal players to “keep fighting” for the remainder of the season after they were sensationally dumped out of the Europa League by Olympiakos.

The Gunners lost on away goals as Youssef El Arabi scored in the final minute of extra-time to give the Greek side a 2-1 victory at the Emirates Stadium.

It was enough for Olympiakos to progress as the tie ended 2-2, with the away goals rule sending last season’s beaten finalists crashing out at the round of 32 stage.

Pierre-Emerick Aubameyang’s acrobatic finish in the second-half of extra-time appeared to have Arsenal on course for qualification after Pape Abou Cisse’s header had sent the tie into an additional 30 minutes.

But El Arabi’s last-gasp winner brought a premature end to Arsenal’s European campaign and – sitting ninth in the Premier League – Arteta now wants his side to bounce back and be in the fight to qualify for the Champions League by their one remaining route.

Asked about the difficulty of finishing in the top four, Arteta replied: “(It is) very hard because looking at the table we’re still far from the objectives that we all have, but we’ve been far all season from it and we have to keep fighting.

“The most important thing now is that the dressing room has to be strong and we have to keep going and react.

“First of all, I have to convince them about what happened in the game and why they are not through in the tie.

“If they continue to do that, there will be rewards like we have done in the last 10 games that we played.”

Arsenal had shown signs of improving since Arteta’s appointment in December but they were lacklustre for much of Thursday evening, having gone into the second leg defending a 1-0 lead.

“We had a lot of hope in this competition. It was a great way for us to be able to go to Europe and it is a very beautiful competition to try to win.”

Olympiakos boss Pedro Martins believed his side got everything they deserved.

“I think against Arsenal we had two very difficult games against a bigger opponent,” he said.