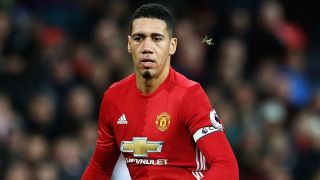 Manchester United have been given a major boost ahead of their Europa League clash with Celta Vigo after Paul Pogba, Eric Bailly, Chris Smalling and Phil Jones all took part in training.

The quartet all participated in United's final session at the Aon Training Complex on Wednesday before the squad fly out to northern Spain for the first leg of the semi-final on Thursday.

Pogba had been expected to return after sitting out the Premier League draws with Manchester City and Swansea City, but there had been concerns that Bailly would be forced to sit out this week's game after going off in the second half of the meeting with Paul Clement's side.

Smalling and Jones, meanwhile, have not featured for United since they suffered respective knee and toe injuries while on England duty in March and manager Jose Mourinho had not anticipated them being available.

"I don't think they will. That's my personal opinion," said Mourinho, who has been publicly critical of the duo's "cautious" approach to their comebacks.

Luke Shaw was absent from the session, with the full-back reportedly set to see a specialist about a foot ligament injury, while Timothy Fosu-Mensah is out with a dislocated shoulder.

preparations at a sunny Aon Training Complex!  May 3, 2017