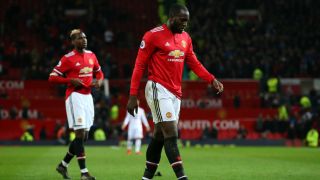 Belgium striker Lukaku scored against Southampton at the weekend but neither player impressed as United settled for a 2-2 draw.

That was the club's third Premier League match without a win and Mourinho has swung the axe in response, completely reshaping his defence.

Marcos Rojo is in for his first appearance of the season while Diogo Dalot makes his first start in England's top flight, while Chris Smalling and Eric Bailly also return to bolster a new-look backline.

Mourinho cited "technical and tactical decisions" as the reasons behind Pogba and Lukaku's omission.

"We believe that this combination of these three young, fast, creative players - even if they are not normally what you call the killer that has a chance, score a goal - we believe in their dynamic and appetite."

Meanwhile, in-form Arsenal have replaced Henrikh Mkhitaryan and the suspended Granit Xhaka with Matteo Guendouzi and Aaron Ramsey, who captains the visitors.

Here's how line up for ...Head to our official app for minute-by-minute updates: December 5, 2018