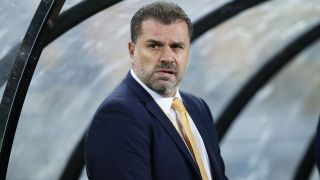 Australia head coach Ange Postecoglou was unwilling to confirm his future amid reports he is set to sensationally quit his post in November.

The Socceroos edged past Syria to secure a spot in another play-off, with their opponents – Honduras – confirmed on Tuesday.

But less than 24 hours after Australia won through in Sydney, News Limited reported Postecoglou was set to quit regardless of the result of November's play-off.

In a media release on Wednesday, Postecoglou offered no confirmation of his future.

"I am aware of reports today suggesting that I will step down as head coach of the Socceroos next month," he said.

"My sole focus is on preparing the team for our final two qualifying matches.

"I will not let anything compromise the team’s journey on getting to a fourth consecutive FIFA World Cup."

"Beyond that [November], should we qualify, there is a period of some months until the World Cup and we agreed that we will need to lock in our setup as soon as possible to maximise our preparation time," he said.

It was widely expected that Postecoglou would step down after the 2018 World Cup in Russia, if Australia made the showpiece event.