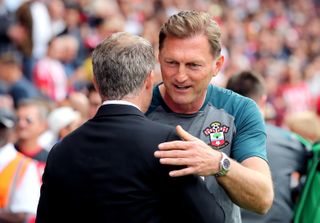 Southampton manager Ralph Hasenhuttl has hailed the work of Manchester United boss Ole Gunnar Solskjaer, but feels big challenges are to come for the Norwegian at Old Trafford.

The Red Devils are the in-form side in the Premier League with four wins from four, which has boosted their chances of qualifying for next season’s Champions League.

Solskjaer was under pressure at the beginning of the campaign, but the January arrival of Bruno Fernandes has helped the ex-United striker turn things around.

While Hasenhuttl is a fan of his opposite number on Monday night, he is aware of the targets and expectation set by a big club.

He said: “In the beginning, people did not underestimate him as he had a very good start and was winning all the games. Then it was the opposite.

“Now it’s a little bit special for everyone around the world to see what he’s doing and that’s a problem in our business.

“It’s more important that he is convinced about what he is doing and at the moment he is proving all the experts wrong.

“The signing in the winter has helped them massively. That is clear. The team is completely reorganised and very different, but still the big challenges are to come.

“With such a club, it’s always important that you don’t just have a good 100 metre record but one for the marathon.

“To be successful with such a club you have to develop the team and game every day over the whole season – you can never stop learning and improving.

“And never stop winning because winning is normal and losing is always a disaster so that’s the challenge with these sort of clubs. Right now, he’s doing a good job in that respect.”

Southampton head to Old Trafford in excellent shape too, with recent victories achieved against Watford and more notably Manchester City.

It was put to Hasenhuttl that this current period of Premier League fixtures packed into a tight schedule mirrors an international tournament.

The Austrian enjoyed the build up to the resumption of top-flight football, but would not be happy to wait so long between matches.

“I’ve liked this period very much,” Hasenhuttl added. “We had a very long break and then you are hungry.

“We had lots of time to analyse and work on our playbook – it’s massive – and to see what we have done right and wrong.

“You don’t really have that opportunity very often. I’m really happy that we had this period and I’ve enjoyed it.

“If you think about that it’s very much like international management. I haven’t thought of it from that side, but for that you first have to qualify for a tournament.

“As an international manager you are always waiting for games. Maybe, there comes a moment when you don’t want 60 games a year and you can step backwards. Something for further down the road.”