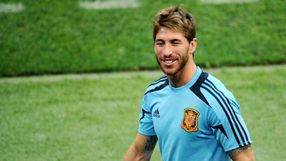 Benzema has been playing in the Spanish league with Real Madrid since 2009 and five of his team-mates are in the Spain squad for the game at the Donbass Arena.

One of those, defender Sergio Ramos, warned the holders need to be on the guard against a player who struck 31 goals in all competitions for Real last season.

"I've spoken to him, we have a great relationship and keep in touch by phone," Ramos said.

"Maybe he didn't have a great beginning [to his career at Real] but he's a great forward. Even though he hasn't scored yet [at Euro 2012], he works hard for the team and if take your eye off him, he will score."

Spain coach Vicente del Bosque agreed that Benzema, who frequently floats deep, is a player that will need to be watched closely.

"Benzema has had a great season for Real Madrid, he is a great forward, he is very accurate when he goes for goal and also a very consistent player," he said.

Spain struggled at times to break down Croatia in their final group game but say they do not expect France to employ negative tactics to combat their own possession game.

"I don't think France will just close their defence, they have strong midfielders, they know how to use the ball and in any case we can change our style a little to use what they offer us," said forward Juan Mata.

France were the last team to eliminate Spain from a major tournament with their victory in Hannover, Germany in the last 16 of the 2006 World Cup.

The French also triumphed in the quarter-final stage at Euro 2000 and in the final of the 1984 tournament.

Ramos played in the defeat six years ago but said plenty has changed in the meantime for both teams.

"A long time has passed since that game, our team then was different, we were very young and didn't have the international experience that we have now," he said.

"I think we have matured now and that is important. Whether it is World Cup or a Euro our philosophy is successful and we respect all our opponents which is a fundamental for us," he said.