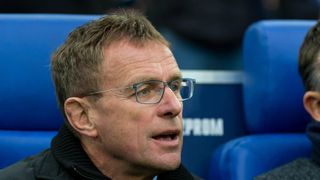 Rangnick has moved into the head coach role for the 2018-19 season, switching from his previous position as director of football at the Bundesliga club.

Hoffenheim coach Julian Nagelsmann will take over for the 2019-20 campaign but Rangnick still plans to make his mark on the squad.

Lookman, who hit five league goals in 11 games on loan from Everton in the second half of last term, is one of the players on Rangnick's radar.

"And we're also looking at something for central midfield, whether that's a number six, eight or 10.

"Our goal is to develop further in every key area and make our playing style something to be feared again.

"We want to be able to get into sixth or seventh gear again so that we can get the best possible results."

Ralf also took on the double responsibility of sporting director and head coach in 2015/16, leading to promotion  July 9, 2018

Jesse Marsch was widely expected to take charge of Leipzig after he left New York Red Bulls, but he instead will work as Rangnick's assistant.

"It was a decision that needed time," Rangnick said. "We have now come to the conclusion that I will take on the role of head coach, supported by the best coaching staff at our disposal.

"Ultimately, it came down to carrying responsibility - I know the league, the team and I speak the language. That isn't the case yet for Jesse Marsch, so that's why he will be working as an assistant coach.

"The aim is for me to be on the pitch for every training session. Many of my tasks as sporting director will have to be dished out internally.

"I'm feeling great, I can't wait to get going and working with this great setup. Everyone in the team needs to feel important and valued, then we can look forward to a successful season with attractive football."