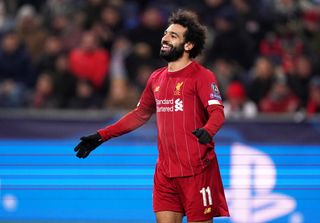 Salah has been the poster boy of Liverpool's rise to the summit of English and European football over the past few years.

His goalscoring contributions have helped the Reds to Champions League glory and they currently sit 22 points clear atop the Premier League.

The Egyptian has been a force to be reckoned with since his return to English football, having had a disjointed spell at Chelsea from 2014-16.

But this season could be Salah's last in a Liverpool shirt as Real Madrid are plotting an audacious bid, according to El Desmarque.

It's said that Los Blancos are keen to offload Gareth Bale in the summer and are preparing to replace him.

Bale has reportedly long been a thorn in Florentino Perez's side, with the club chairman growing increasingly frustrated with the player.

The main cause of tensions is thought to be the Welshman's huge wages which are making it difficult for Real Madrid to find a buyer.

However, Bale was reportedly close to a move to China last year and Madrid believe that there is a chance of rejuvenated interest.

Zinedine Zidane's preference of replacement would be Kylian Mbappe, but PSG are unwilling to sell the player for less than £255m.

Liverpool are thought to be open to a sale as they view Salah as someone who has run his course in the club's successful resurgence.

The report claims that Salah has a release clause of £126m and that, if he is so inclined, Florentino Perez would not hesitate to pay the full fee.