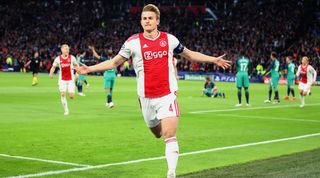 The 19-year-old is one of the most sought-after players on the market this summer after shining as the Dutch club won the domestic double and reached the Champions League semi-finals.

Europe’s biggest clubs are set to enter a bidding war for the Netherlands international, with the likes of Barça, Manchester United, Juventus and Bayern Munich showing interest.

However, El Mundo Deportivo has reported that Real Madrid could also swoop, with centre-back Ramos potentially departing for the Chinese Super League.

PSG are also pushing hard in their pursuit of De Ligt, who is currently on international duty ahead of England’s Nations League semi-final clash with the Dutch on June 6.

According to the report, the French champions would be willing to meet the demands of the Eredivisie club, as well as those of the player and his agent Mino Raiola, which have put off Barcelona.

De Ligt’s future won’t be decided until after the Nations League on June 9.

SURPRISE! 5 teams you didn’t know have played in a European Cup final

UNLUCKY The 9 best teams that DIDN'T win a thing