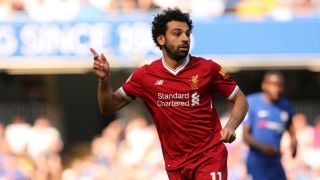 Mohamed Salah enjoyed a sensational debut season with Liverpool and Opta data shows he is fully deserving of the new long-term contract he secured on Monday.

Salah joined the Reds from Roma in June 2017, with some suggesting at the time they had paid over the odds for the winger by agreeing a deal which had the potential to reach €50million.

But he swiftly and emphatically swept away such doubts, seamlessly transitioning to Premier League football after a previous underwhelming spell with Chelsea.

Although the most Liverpool could achieve was a fourth-place finish in the Premier League, Salah was a leading light and his record-breaking 32-goal haul saw him claim the PFA Players' Player of the Year award ahead of Kevin De Bruyne.

His form in the Champions League – scoring 11 times including during qualifying – helped Liverpool reach the final, but his match ended early in Kiev following a tangle with Sergio Ramos, who captained Real Madrid to a 3-1 win.

While Liverpool were unable to ensure Salah's displays were repaid with a trophy, he has now been handed a contract that reportedly runs until 2023 and contains no release clause.

There is no doubt the Egyptian enjoyed a remarkable first season at Anfield, with Opta data further highlighting that…

44 – No Liverpool player has ever scored more goals in their debut season for the club than Salah's haul across all competitions.

25 – His tally of goals scored with his left foot is the most in any single Premier League season.

32 – The forward broke the record for the most goals in a single 38-game Premier League campaign.

1 – Salah became the first Premier League player to score more than 40 goals in all competitions since Cristiano Ronaldo in 2007-08.

17 – The Egypt star only failed to score against two Premier League sides last season – no player has ever scored against more in one term.

45 – Lionel Messi scored one more goal than Salah across all competitions last season. The Argentina captain was the only player from Europe's top five divisions to outscore the Liverpool man.

102 – Salah has averaged a Premier League goal every 102 minutes across his spells with Chelsea and Liverpool – no player in the division's modern history who has scored 10 or more has notched with greater frequency than the 26-year-old.