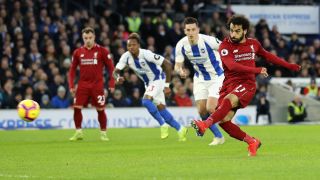 Salah again came under fire after being fouled for a penalty, which he converted, in Saturday's 1-0 victory over Brighton and Hove Albion.

Robertson backed his team-mate and said the constant questions surrounding Salah were unfair.

"Every time it happens, we go back, everyone looks at the video, and you go, 'Well, it's not a dive'," Robertson told UK newspapers.

"He is not that sort of player, so how many times is it going to happen?

"I was at the edge of the box and it was a stonewaller. If people are starting to say Mo has gone down easily, it's not fair.

"The one against Arsenal, especially, he got clipped three times. They still appealed. It's a bit of desperation."

Salah's spot-kick sent Liverpool seven points clear at the top, although Manchester City can close that back to four with a win over Wolves on Monday.