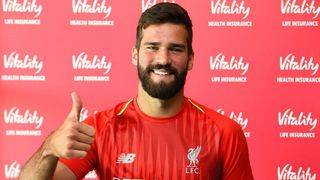 Roma icon Francesco Totti conceded the Italian club had to sell Alisson to Liverpool as they could not turn down the world-record fee for a goalkeeper.

Brazil international star Alisson joined Premier League side Liverpool in a deal that could earn Roma up to €72.5million.

Alisson played a key role as Roma finished third in Serie A and reached the Champions League semi-final last season.

Former attacker Totti, however, admitted Roma could not say no to the money on offer despite Alisson's quality.

"We'll try to strengthen as soon as possible, so that Roma can compete at the top.

"Alisson? The market figures have changed, €75m for a goalkeeper happened for the first time and we couldn't say 'no'.

"I'm sorry that we've lost one of the best goalkeepers in the world, but we'll try to build a strong team regardless."

Alisson is not in Liverpool's squad for their International Champions Cup campaign in the United States following his World Cup commitments with Brazil.