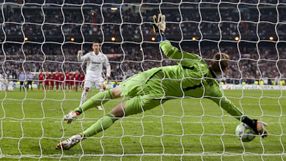 After World Player of the Year Lionel Messi smashed a penalty against the bar in Barca's semi-final reverse to Chelsea on Tuesday, Real's Cristiano Ronaldo had his saved by Manuel Neuer in Wednesday's dramatic shootout that sent Bayern Munich through to next month's final.

The Portuguese had netted from the spot early in the first half, his 25th successive penalty success, but when he stepped up to take a second after the tie at the Bernabeu ended 3-3 on aggregate Neuer dove to his right to palm the ball to safety.

Ronaldo was also denied in the shootout playing for his former club Manchester United against Chelsea in the 2008 Champions League final, but his team prevailed when Edwin van der Sar blocked Nicolas Anelka's tame effort.

This time around, the world's most expensive player, for whom Real paid United around 94 million euros in 2009, could only look on in anguish as Neuer also stopped Kaka's penalty, Sergio Ramos skied his shot over the bar and Bastian Schweinsteiger stepped up to send the Germans through.

"You have to miss one eventually," Real Madrid manager Jose Mourinho said in a television interview. "After two hours of working to the limit and the penalties arrive it is not easy."

Ronaldo had scored all 13 of his penalty-kicks in the Champions League and La Liga this season and his two goals during regulation time took his tally for the season to 56 in all competitions, seven behind Messi.

Ronaldo won the World Player award in 2008 before Argentine Messi claimed three straight gongs and the pair will likely head the list of candidates for next year's award as well.

"I don't want to be as radical as many people saying this one is the best and this one is not," Mourinho said.

"We are talking about two unique players, Cristiano and Messi," added the former Porto, Chelsea and Inter Milan manager, whose bid to lead Real to a 10th European crown was ended in the semi-finals for a second consecutive year.

"For me it's easy to say that this season Cristiano has been the best, but the best by some distance.

"He missed a penalty in the semi-finals of the Champions League, Messi too.

"I don't know whether he missed or whether Neuer showed incredible skill to save it."

Ronaldo now needs to pick himself up for Sunday's La Liga clash at home to Sevilla, with Real seven points clear of Barca with four games left and closing in on a first domestic title in four years.