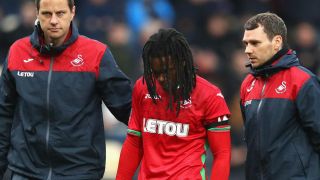 Paul Clement has described the "damaged" state in which Renato Sanches arrived at Swansea City in as the Bayern Munich loanee continues to toil at the Liberty Stadium.

Since forming part of Portugal's victorious Euro 2016 squad, Sanches' career has stalled badly, with a difficult first season at Bayern followed by a season in which he has again failed to live up to the hype in the Premier League.

Sanches has neither scored or assisted a goal in 12 Premier League appearances this season and has missed their last three league games through injury after starting Carlos Carvalhal's first three games in charge.

Former Bayern assistant Clement was crucial in bringing Sanches to Wales, but the midfielder was out of the side by the end of the Englishman's reign.

"I thought that was a massive coup for us, to attract a player of that level after what he'd done a summer earlier in the Euros," Clement told The Times.

"I knew it would take some time. I was with him the first six months at Bayern and he hadn't played regularly. His physical condition was down. His confidence was down. When I called Bayern, [chief executive Karl-Heinz] Rummenigge initially said to me, 'There are ten other clubs in,' and I left it.

"It was only a couple of weeks later when I spoke to Carlo and asked, 'Have you got any players for me?' Tongue in cheek really, and he went, 'Renato Sanches.' Bayern really supported it. They thought he was going to a club who played football, and to a coach who would care and give him the attention he needs.

"He wasn't so keen initially. He thought he was going to go to Man United, Chelsea or Paris Saint-Germain.

"Bayern were saying, 'You're not going there, it would be the same situation, you're not going to play.' When he came, he was far more damaged than I thought. It was really sad. He was a boy who had almost got the weight of the world on his shoulders.

"He had a desire to please and a desire to prove everybody wrong. He got in a vicious cycle of poor choices. The other players were saying, 'He's playing like that and you're not picking me,' so it became difficult to pick him."