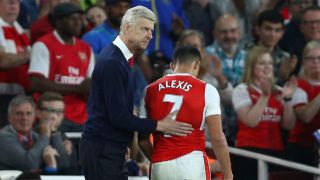 Sanchez, who is contracted until mid-2018, has constantly been linked with a move away from the Emirates Stadium.

Wenger's future is also unclear as the Frenchman's deal expires at season's end, and protesting fans have regularly called for his departure.

Sanchez insisted he was unsure about his own future, saying it would come down to the club.

"I cannot tell you now [about my future]. We have to wait until the end of the season," he said in quotes published by the Mirror.

"As I always say, it doesn't depend on me. It depends on the club. What they like, what they don't like.

"I always said the same: I try to do my best, to support the team, to score goals, to win victories. And we will see at the end.

"If they like that I carry on, or they don't. Whatever they want, we will see it at the end of the tournament."

Arsenal are fifth in the Premier League and in the FA Cup final, but the latter part of their season has been overshadowed by fans calling for Wenger's exit.

Sanchez is unhappy with the way his manager has been treated after almost 21 years at the club.

"For me, it [fan demonstrations] is very bad. He is the manager who gave a stadium to the club, won cups, and he has been 21 years in the job," he said.

"He is the creator of the stadium, the players and style of the club."