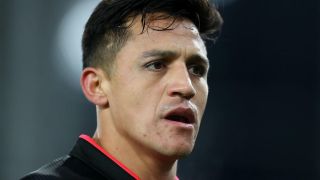 Alexis Sanchez says a desire to feel "important and loved" was behind his move to Manchester United from Arsenal.

The long-anticipated swap deal that saw Henrikh Mkhitaryan head in the opposite direction was completed on Monday, bringing to a conclusion one of the biggest transfer stories of the January window.

Sanchez took a swipe at his critics in an Instagram post after the deal was announced, singling out the former Arsenal players who had questioned his attitude towards the end of his stay.

And the Chile international says manager Jose Mourinho's efforts to make him feel wanted at United were an important factor in his decision to join the club.

"He indicated it is important for the club for me to be here," Sanchez told MUTV. "I also believe that the club itself cared about me joining, and I got the impression that they were keen for me to come here and wear the number seven shirt.

"I think that also gets through to the player. Players sometimes need to feel important and loved by the club. That was one of the things that attracted me to come here, along with the manager, who is a person who won everything in Italy, the same as he did in Spain, and he's a manager who likes to win."

The former Barcelona man has been handed the iconic number seven shirt, and Sanchez is excited by the visions of United's past conjured by his new jersey.

"When they told me that Cristiano [Ronaldo], [Eric] Cantona, David Beckham had all worn it, just thinking about that number seven sets you off dreaming in your head with ideas about lifting the Champions League trophy and winning the Premier League title," he continued.

"So yes, I’m fulfilling a dream and I hope to give my very best and win many trophies at this club."

City ultimately ended their interest in the attacker, but Sanchez hopes to recreate the dressing-room atmosphere from his time in Catalonia as he bids to bring success back to United.

"I believe that having a family in the dressing room is very important when it comes to winning trophies," he explained.

"I played in Spain and we also had a very good dressing room and I won a lot of things. So I think that in my experience of being in dressing rooms, it's so important to have a really good group.

"I also think that the club always needs to be strengthening and bringing players in, and in this instance that's why I'm here, to work hard for the team, and to try and win everything with them."