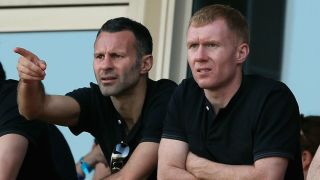 Paul Scholes will utilise his contacts at Manchester United and beyond in order to make a success of his management role at Oldham Athletic.

The United legend, who spent his entire playing career at Old Trafford, was presented at Boundary Park on Monday as he took on the top job at the club he supported as a child.

Oldham, once members of the Premier League, now ply their trade in League Two and Scholes said he will tap into the relationships he established in a glittering playing career to help boost their fortunes.

United youngster Zak Dearnley is already on loan at the Latics and that could be a sign of things to come.

"That's what I'll be trying to do," said former England international Scholes when asked if he will be digging into his contacts book.

"Obviously Zak's come in, he scored his first goal on Saturday and he made a big difference in the game. I was really pleased with him.

"I've got a few people who I can get in touch with at various different clubs, not just Manchester United.

"Obviously I'm very close with Nicky [Butt], I'm close to the people at Man United, and if they can help me in some way I'm sure they will."

Scholes is the latest in a long line of ex-United stars to try their hand at management and he revealed that the likes of Wales boss Ryan Giggs, along with the Neville brothers Gary and Phil, had offered words of encouragement.

"They wished me good luck, they just want me to do well," he said.

"As in the jobs they're doing - Phil with the England ladies team, Ryan with the national team, and Gary when he went to Valencia - we all want each other to do well.