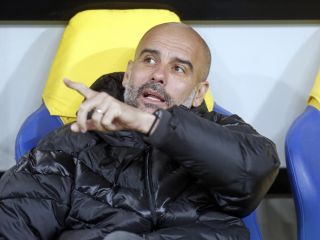 Pep Guardiola claims it took an outstanding performance from Manchester City to beat a Shakhtar Donetsk side that can still cause them problems in the Champions League.

The Premier League champions had little trouble as they eased to a 3-0 victory in their Group C opener against the Ukrainians in Kharkiv on Wednesday.

The scoreline was a repeat of City’s victory over Shakhtar in last season’s competition, a result they followed up by beating the same opponents 6-0 at the Etihad Stadium.

The sides, who also played each other in the 2017-18 campaign, are due to meet again in November and Guardiola, who has now faced Shakhtar 12 times in his managerial career, is taking nothing for granted.

The City boss said: “In the beginning it was more difficult, but the more you play against one opponent you know them better and you know a little bit what you have to do to win.

“But in the end if that has happened it is because the Barcelona, Manchester City or Bayern Munich players were incredible. That is why we could win.

“In my opinion Shakhtar made an incredible job and they wouldn’t do that if they didn’t have incredible ability to make incredible build-up. They are incredibly fast.

“They are exceptional players and I know how difficult it is, but of course we made an incredible performance. That is why we won.

“The only problem I think for Shakhtar is the rhythm. We can maintain a lot of minutes in a high rhythm, but they play in a league where it’s not as high.

“But always when I watch the opponents – for example now I am going to see Dinamo Zagreb before the next game – I try to discover the best they can do. I don’t see the weak points. I always see the strong points.”

Shakhtar did occasionally threaten City on the break, but Guardiola’s side rarely relinquished control. Riyad Mahrez put them ahead after 24 minutes when he turned home a rebound after an Ilkay Gundogan shot had hit a post.

Excellent evening and gr🎱 way to bounce back 👌🏼 Happy to start the @ChampionsLeague season with a win ⚽🙌🏼 #CmonCity@ManCitypic.twitter.com/hHBFw4ixG3— Ilkay Gündogan (@IlkayGuendogan) September 18, 2019

Mahrez then turned provider for Gundogan to add a second before the break and Gabriel Jesus scored a third late on.

Guardiola felt his side could have won more convincingly but for a fine display by Shakhtar’s veteran goalkeeper Andriy Pyatov.

The 35-year-old Ukrainian did not necessarily make many saves, but Guardiola felt his all-round performance in terms of breaking up attacks was excellent.

“Pyatov is one of the best keepers,” said Guardiola, who sought out the keeper after the final whistle.

“When you want to make a pass behind the back four of Shakhtar he is reading (the game) perfectly. It is not easy to run behind because he anticipates the actions better than most keepers I have seen in my life. He reads exactly what’s in front of him. He’s a huge talent doing that.”