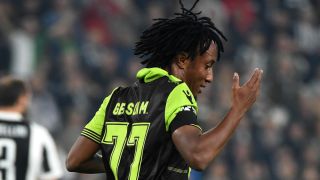 Gelson Martins was encouraged to join Atletico Madrid after Diego Simeone identified the "special characteristics" he can bring to the team.

The 23-year-old, who was officially presented at the Wanda Metropolitano on Tuesday, is excited to get to work under his new boss.

"The coach's message was very important to me and he said I could add value to the team," he told reporters. "All the players are very good, but the coach thinks I have special characteristics and that's why I came.

"Since I arrived, I have worked very hard and with quality, and that will help me in the way I play, which is why I am very happy to work with Simeone."

Club president Enrique Cerezo hopes Gelson can become a "legend" at the club, much like compatriots Tiago Mendes and Simao, who enjoyed great success with Atletico in the last decade.

"We're signing a footballer who, despite his youth, already has a great deal of experience," said Cerezo.

"Here, Portuguese players have become legends and we are sure that you will give everything for these colours."