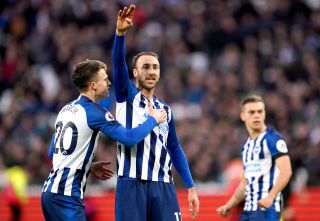 Robert Snodgrass maintains West Ham can get out of relegation trouble despite their latest setback.

The Hammers slipped into the drop zone after they blew a 3-1 lead to draw 3-3 at home to fellow strugglers Brighton.

With trips to Manchester City and Liverpool next up, things are likely to get worse before they get better for David Moyes’ side.

But midfielder Snodgrass, who made Issa Diop’s opening goal before scoring twice himself, insists they are good enough to stay up.

“It would have been a great win, which would have taken us further away from the bottom end and looking up,” the midfielder told West Ham TV.

“But I believe this team and the squad of players are definitely good enough. The most important thing is you need to keep scoring goals, that gives you the best possible chance.

“We must keep driving forward, we’ve got too many games coming up to feel sorry for ourselves. It’s a hard one, but we’ve been here before, we’ll dust ourselves down and come back stronger.”

West Ham were architects of their own downfall, with Angelo Ogbonna’s own-goal and Diop’s defensive howler which let Pascal Gross in allowing Brighton back into the match.

Then, with 11 minutes to go, Glenn Murray survived a VAR check for handball to snatch a point.

“You could tell from the celebration that I thought it was a goal at the time I had scored,” said the veteran striker.

“But when no one celebrated with me and 60,000 people questioned it, the doubt started to creep into my mind.

“It was given and I felt that we could’ve gone on to win the game at that point. But it’s really difficult in the Premier League and if you give anyone a two-goal advantage it’s going to be an uphill task.

“We knuckled down, stuck together and came away with a valuable point.”