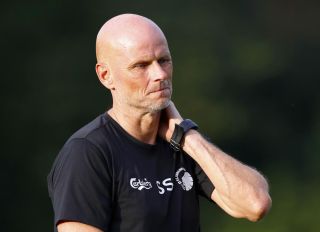 Copenhagen boss Stale Solbakken believes Celtic could find themselves facing a dilemma in their Europa League clash at Parkhead on Thursday night.

The Danish side were held to a 1-1 draw by the Hoops in last week’s first leg of the last-32 clash, with the Scottish champions favourites to finish the job at home.

Speaking at Celtic Park before his players trained, Solbakken claimed a tight match in the second leg could be problematic for the hosts.

The 51-year-old Norwegian said: “It looks over but it’s not over. We don’t see it as a bonus, we see it as a possibility.

“The odds have crept a little bit more to Celtic’s side after their away goal.

“That’s natural but we know we have more or less scored at away grounds this season.

“Not many but we have scored. It’s also a bit of dilemma to Celtic – what do they do if it’s still quite even?

“And even if they score first then we score the next so there’s also a little bit of psychology in it.

“We are satisfied with what we have done in Europe this season, coming through the qualification group stages.

“We don’t have any priority, we just have to win every game.”

Solbakken admits that Celtic, who have won 10 domestic games in a row since the turn of the year, are in better shape than his side going into the second leg.

Copenhagen have lost one and drawn twice since they returned from their winter break and are nine points behind league leaders FC Midtjylland while the Hoops are racing clear at the top of the Ladbrokes Premiership with a 12-point lead over Rangers having played a game more.

The former Wolves boss said: “When a Scottish team meets a Danish team there will be times where the Scots have a more settled team and the Danish team doesn’t and the opposite.

“I think now they really believe and trust and have won 10 in a row.

“They are more on a high than we are but we managed to come back at the Parken stadium and there is nobody in that dressing room who doesn’t believe it can happen.

“It has been a quite difficult season in many aspects – injuries in all positions and never really having a stable team and playing every three days but we’ve still made it a fight out of every game.”

Jens Stage, who had a VAR-awarded penalty saved by Fraser Forster last week, claimed belief returned to the Copenhagen camp after the break in the Danish capital.

He said: “I felt in the first half we didn’t really believe in ourselves.

“For the second half and I don’t know why, it was like everybody got a confidence boost and we kept following the game plan, only with confidence.

“I think the atmosphere in Copenhagen was amazing and it’ll be some of the same here.”