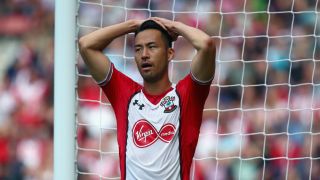 Southampton's miserable record on the opening day of a new season continued on Saturday as Mauricio Pellegrino's side were held to a 0-0 draw by Swansea City.

Only once in their previous 10 Premier League seasons had the Saints claimed all three points on the first weekend, and they were unable to improve that record despite dominating proceedings.

Under the guidance of new boss Pellegrino the hosts impressed in the opening 45 minutes with 13 shots to Swansea's two, Dusan Tadic and James Ward-Prowse going closest for the hosts.

Swansea were limited to half chances for loanee Tammy Abraham and he was unable to test Fraser Forster on his first top-flight start.

It was Southampton who posed the greatest threat, though, as more chances came the hosts' way but their profligacy in front of goal proved costly as Swansea clung on for a point.

Pellegrino's reign began with a lively start from his players, Manolo Gabbiadini and Tadic going agonisingly close inside five minutes.

Gabbiadini's header clipped the top of the crossbar, while Tadic could not steer the ball beyond Lukasz Fabianski after Ryan Bertrand's marauding run down the left.

It was a brief attacking moment for the visitors and the impressive Ward-Prowse was denied the opening goal by a superb block from Alfie Mawson.

The home side demanded a penalty on the half-hour as Gabbiadini was felled by Federico Fernandez, but referee Mike Jones waved away their protests and a dominant Southampton then saw Maya Yoshida's acrobatic strike go wide before the break.

A refreshed Abraham produced an excellent Cruyff turn inside the penalty area in the opening minute of the second half, but his shot was deflected wide by Cedric Soares.

Southampton quickly resumed their control of the encounter, with Tadic and Gabbiadini both heavily involved without stretching Fabianski.

That became an all too regular occurrence for the hosts as Swansea defended deeply in search of an opening day point on the road.

And cling on they did, but only thanks to misses from Yoshida and Tadic – the latter finally testing Fabianski before the Japan international inexplicably headed over and then sent a free-kick bouncing just wide.