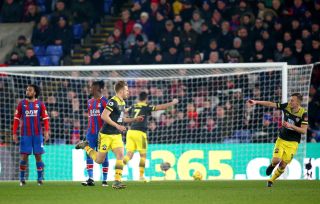 Southampton continued their revival with a 2-0 victory away to Crystal Palace which saw them leapfrog the hosts and make it six wins from their last eight games in all competitions.

Nathan Redmond and Stuart Armstrong were on target for Ralph Hasenhuttl’s team, who are now ninth in the Premier League table and eight points ahead of the bottom three.

Palace’s five-match unbeaten run in the division came to an end in disappointing fashion with Roy Hodgson’s men unable to cope with the energy or movement of the visitors at Selhurst Park.

🎶 OH WHAT FUN IT IS TO SEE, SOUTHAMPTON PLAY AWAY! 🎶 pic.twitter.com/KJSa6SKvbh— Southampton FC (@SouthamptonFC) January 21, 2020

Michael Obafemi was handed an opportunity in place of Danny Ings, with the Saints top goalscorer rested ahead of the FA Cup clash with Tottenham at the weekend.

Palace, who were unchanged from the 2-2 draw at Manchester City, were on the back foot for much of the opening quarter of an hour, but created the first chance of the match.

The returning Jannik Vestergaard tried to dribble past Jordan Ayew deep inside his own half, but was tackled and it allowed Cenk Tosun a free run on goal. He only had Alex McCarthy to beat and yet blazed over from 16-yards with 18 minutes played.

Hasenhuttl was forced into a change moments later with Cedric Soares taken off after failing to recover from a strong challenge by Jairo Riedewald and replaced by Oriol Romeu, which saw James Ward-Prowse drop to right-back.

Soon after Southampton did fashion an opportunity and, unlike Palace, they were clinical to open the scoring after 22 minutes.

Jack Stephens passed into the path of Redmond, who impressively turned away from Martin Kelly and let fly from outside the area – giving Vicente Guaita no chance and finding the top corner for his fourth goal of the season.

Armstrong went close on two occasions for the away side not long after before Shane Long could only run the ball out of play when he tried to round Palace’s Spanish stopper as it remained 1-0 at the break.

Wilfried Zaha was fortunate to escape punishment after the whistle when he appeared to poke Ward-Prowse in the eye and despite a VAR check, they deemed the action not to be violent conduct.

The let-off did not affect Southampton’s focus and instead they doubled their advantage in the 48th minute through Armstrong.

Redmond found the Scotland international and he curled in from 25-yards to hand Hasenhuttl’s men a decisive two-goal lead.

Palace – and Zaha – continued to be frustrated and Hodgson made a double substitution in the 62nd minute with Max Meyer and Joel Ward introduced.

Connor Wickham joined them on the pitch seven minutes later, but he was unable to make the most of two late chances as Southampton bounced back from the weekend defeat to Wolves in style.