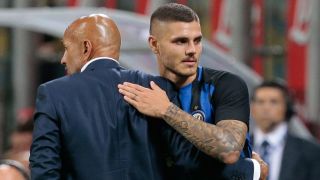 Luciano Spalletti has lauded Inter captain Mauro Icardi as "one of the best" players he has coached ahead of the Nerazzurri's trip to lowly Benevento.

Inter are still unbeaten under former Roma boss Spalletti, and sit third in Serie A, having taken 16 points from their opening six league fixtures.

Despite having netted six times over this run, Icardi has not looked at his sharpest in Inter's recent matches, though Spalletti insists that is down to the striker adjusting to the new role he has been tasked with.

"Icardi? I don't see a player who has done badly or who is having a tough time," Spalletti said.

"He's one of the best players I've ever coached. As we look for consistency, we've had some dips in form and this is part of the growth process.

"I've asked Mauro to drop further back more, he's focused on this and I know he'll take advantage of it. We have to be better at getting the ball forward.

"Even if they're not the cleanest passes, he knows how to clean them up."

Inter's impressive start has only been bettered by joint-leaders Napoli and Juventus, who have both taken maximum points so far.

And though Spalletti is pleased with the start of his tenure, he believes his side must be continuously aiming to better themselves.

"We must be demanding of ourselves, we have to know that we're still not who we want to be," Spalletti added.

"This obliges us to not lower our guard and to have better speed of thought so that we're less predictable.

"I'm looking for different speed of thought and execution. We take too many touches and we're still a bit lazy in our thinking.

"Up to now we've had a good attitude if you consider where we want to get to. We're doing the right things and fortune goes to those who look for it.

"A mark for the start of the season? In terms of effort, top marks but that's not everything. We want to go further and progress, use the time we have well and work in a professional way to improve day after day."