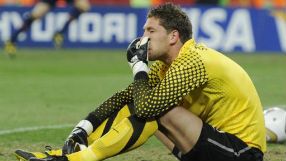 Ajax, third in the league five points behind leaders PSV Eindhoven with eight matches left, are also without second choice goalkeeper Kenneth Vermeer with an Achilles injury so Jeroen Verhoeven will play on Sunday away at Willem II Tilburg.

Stekelenburg, 28, has been the first choice for the national team since Edwin van der Sar's international retirement in 2008.

He will miss the Euro 2012 qualifying matches against Hungary on March 25 and 29.